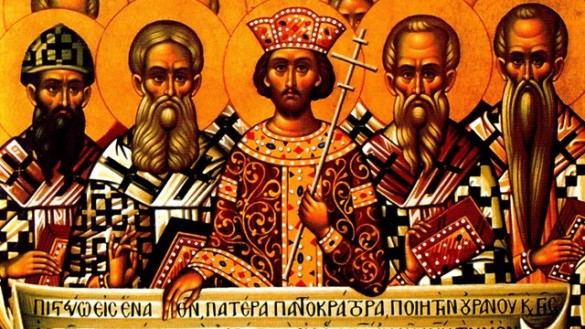 Of late, certain theologians, under the influence of contemporary, world-wide currents, have begun to savour the words “ecumenicity,” “ecumenical spirit,” and “ecumenical movements,” as if they were candy. Ecumenicity; what a beautiful word! And yet, behind these words, lies hidden a most fearful danger for Orthodoxy. What is this danger? We will show you by means of an example.

Imagine a woman, a woman faithful to her husband, a woman who will allow no third party to enter into their relationship, ever mindful of the promises which she had made before God and before men. She is a woman of exceptional beauty, drawing the eye of many a man. On account of her uprightness, however, anyone who dares to touch, or to proposition her, immediately meets with her anger. Should such a one persist, this honourable woman will deliver a strong slap to his face in order to bring him to his senses.

Those men who are learned in this vile business, however, will try another method. These will try to uncover what it is that this woman likes; does she perhaps love poetry, or philosophy, or art? By means of these things the secret admirer will trap her. With great deftness he will begin having innocent conversations with her on those subjects that are beloved to her. “What a wonderful poem!”; “What a beautiful painting!”; “What a wonderful play!”; “How sweet a piece of music!” And thus begins the dialogue.

Gradually the unsuspecting woman is lured into longer conversations with the deceiver who, while his tongue speaks of philosophy and art, his heart leaps at the hope of taking the woman for himself. Finally, after an air of great familiarity and mutual understanding has been achieved through these conversations, the door is opened to the foul deed, the shameful union. Just as the most-evil serpent succeeded in beguiling Eve by means of a simple conversation, in like manner the seed of shameful union was sown.

Did you get what we are trying to say, beloved? We have spoken in a parable.

The woman concerning which we have spoken, is our Orthodox Church. She is this beauty. She is the woman who, according to the Book of Revelation is clothed in the Sun, who wears upon her head a crown of twelve stars, and who has the moon under her feet. (Rev. 12:1-2). It is the Orthodox Church which has remained faithful to the Lord, to the eternal bride-groom. It is she who has kept pure the tradition of the Lord and of the Apostles —both written and unwritten— in accordance with the God-inspired call to, stand fast, and hold the traditions which ye have been taught, whether by word, or our epistle. (2 Thess. 2:15).

It is she, the Orthodox Church, which for nineteen centuries has fought the hard and bloody battle against various deceptions, against the various heresies which have sought to pollute and corrupt her holiness. One of the worst of these heresies is Papism, which, on account of its delusions, its authoritarian spirit, and its atrocities, caused the rise of Protestantism and the fracturing of all of Christendom. Yes, the Papists are heretics. The enemies of the Orthodox Church, including Papism to be sure, know well that she has preserved the faith of her Fathers. Yet, having been persuaded through many examples that they cannot conquer that fortress which is Orthodoxy by means of a frontal attack, these enemies have recently begun trying by other means. They have begun a new war, a war of peace, a war worse than the Crusades. Do you not hear the voice of the serpent, seeking to corrupt the minds of Orthodoxy, leading us away from our simplicity? But I fear, lest by any means, as the serpent beguiled Eve through his subtlety, so your minds should be corrupted from the simplicity that is in Christ. (2 Cor. 11:3).

Here is what the serpent says: O, Orthodox Church! Why do you keep your distance? Why are you afraid of me? I am no dragon; I am a sweet angel bearing the message of love. I am not going to hurt you. Keep your dogmas and your traditions. Leave these things to the theologians… I invite you into my room to discuss other matters. Let us make a common stand against hunger, against poverty, against atheism, against communism, against war. Do these matters not move you? Does this proposition not excite you? Come then, let us begin our conversation on high, on the level of ecumenicity, on the level of mutual understanding. You will see just how beautiful our coming together can be!

O, Orthodox Church! Our suffering mother! Will you accept this proposition? Will you enter into dialogue with Papism? Can you not see the danger inherent in this proposition? That those who ineptly and unworthily represent you are creating conditions favorable to your enemies to such a fearful degree that you, without even taking notice, will fall into the arms of Papism? And what will follow then? A union, a pseudo-union, spiritual adultery, a most vile act; something which ought never to have occurred, and which will require centuries of repentance from those Orthodox who played the role of pimp for the Orthodox Church. The hour will come when they will sigh and say: “Let the tongue we used to speak about ‘ecumenicity’ and ‘mutual understanding’ be silent; let these feet which ran to bring together Orthodoxy and wolves in sheep’s clothing, become leprous; let these hands which signed ecumenical epistles and documents fall off!”

This, my beloved, is the famous ‘theory of ecumenicity’ which our leaders savour!

We repeat: the Ecumenical Movement, under whose umbrella gather all manner of heresies, represents a danger to the Orthodox Church. It deprecates the importance of the dogmas which, having been miraculously articulated in the brief definitions of the Holy Oecumenical Councils, are the skeleton, the backbone without which the body becomes a limp and formless lump. It deprecates the Holy Canons, which the ecumenists call obsolete, rusty weapons. To put it concisely, the ecumenists deprecate the Orthodox Church as a whole, saying that it is self-centered, that is a blasphemy for us to consider her to be the one true Church, possessing the genuine truth of Divine Revelation. Within this context the dogmas and the moral life, inseparably joined in the Orthodox Church, tend to evaporate, leaving behind nothing but a fraudulent version of love. The theory of ecumenicity, the theory which calls all different peoples to live together in the name of some tenuous peace, a theory supported within worldly and political circles in our century and which has already been applied to the spiritual sphere where compromise is unacceptable, will ultimately lead to conflict and turmoil, truly, to Babel.

Leaven, if it becomes contaminated, loses its ability to make things rise; Orthodoxy, the most excellent leaven, the leaven of truth, is capable of leavening the whole lump, but only so long as it remains unpolluted by foreign ingredients, so long as it remains pure. For this reason the followers of this theory of ecumenicity are the enemies of Orthodoxy. For this reason we do not hesitate to call this movement —the Ecumenical movement— a new heresy, from which the Orthodox Church must be protected.

In conclusion, during these critical times when the Orthodox Church stands in danger, we call out to the faithful from our own watchtower: “Orthodox faithful! Remember that Church of which you are children. Remember the rivers of blood our Fathers spilled to keep our Faith unadulterated; not one iota did they permit to be subtracted or added to our Faith. Remember the rallying cry of the heroes of the Revolution of 1821. These men —may their memory be eternal— struggled first for the faith, and then for their homeland. All of these heroes and martyrs, known and unknown, call to us from their graves: ‘Stand firm upon the bulwark of Orthodoxy!’”